[Verse 1]
They say thirty is the new twenty
And twenty is the new thirty shit I guess
Makes sense, cause fifteen year olds seem twenty
And twenty five year olds seem ten
I used to drink away my paycheck
Celebrate the mistakes I hadn’t made yet
Our generation isn’t the best on safe sex
We forget the latex, becoming Planned Parenthood patients
Synthetic heroin is the new basehead
So much to escape, fuck a straight edge
Walk around looking through a fake lens
Apps this good, whose got time to make friends?
I wish I didn’t care
If cynical hispters with long hair
And cocaine problems, like my music
It’s not my issue, I can’t solve it

[Hook]
My flight has finally landed down
And the ground has stopped moving all around
Eyes open, awake for the very first time
We both forfeit this game of crime

[Verse 2]
They say it’s so refreshing to hear somebody on records
No guns, no drugs, no sex, just truth
The guns that’s America, the drugs are what they gave to us
And sex sells itself, don’t judge ‘til it’s you
Ah, I’m not more or less conscious
The rappers rappin’ ‘bout them strippers up on a pole, popping
These interviews are obnoxious
Saying that ‘it’s poetry, you’re so well spoken,’ stop it.
I grew up during Reaganomics
When Ice T was out there on his killing cops shit
Or Rodney King was getting beat on
And they let off every single officer
And Los Angeles went and lost it
Now every month there is a new Rodney on Youtube
It’s just something our generation is used to
And neighbourhoods where you never see a news crew
Unless they’re gentrifying, white people don’t even cruise through
And my subconcious telling me stop it
This is an issue that you shouldn’t get involved in
Don’t even tweet, R.I.P Trayvon Martin
Don’t wanna be that white dude, million man marchin’
Fighting for a freedom that my people stole
Don’t wanna make all my white fans uncomfortable
But you don’t even have a fuckin’ song for radio
Why you out here talkin race, tryin’ to save the fuckin’ globe
Don’t get involved if the cause isn’t mine
White privilege, white guilt, at the same damn time
So we just party like it’s nineteen ninty nine
Celebrate the ignorance while these kids keep dying 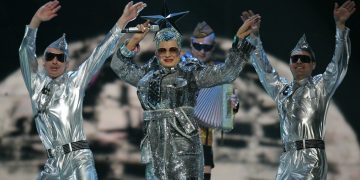